I’m not an artist, that’s not to say I don’t keep trying. Recently I’ve been reading Dante’s Inferno in order to illustrate a couple of scenes from it- it’s all the fault of the Theme of the Month over at john-howe.com and consequently I’ve been having visions of hell wherever I look. 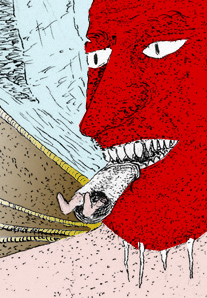 The trouble is my studies, or rather the amount of time I now have to study in. For quite a few years at work there was enough time to study in through the week which meant when I came home I could do whatever I wanted to. Now at work I’m considerably busier than this time last year, add to that the amount of studying I have to do has increased means that my days are virtually restricted to nothing else but study study study. This would be fine if I did not want to do anything else, or if the studying was to enable me to get a better job, but that’s not the case. Studying was something to keep the grey matter ticking over on subjects that interested me. This years course can have me pouring over an equation for an hour or two, and at the end I still don’t really know or care why I’ve been trying to decipher it.

For a couple of weeks it’s not been too bad, but there have been definite signs that it’s not doing me any good; stress levels have been rising steadily, and time to do anything other than study has been decreasing steadily. So it comes down to this, do I want to kill myself trying to study, or do I want to spend my time doing something I actually want to do? Bit of a no brainer really. I’m now taking a study break in order to concentrate on painting, and perhaps writing something – all for fun of course. I decided two days ago to stop trying to study, and since then I’ve sketched quite a bit, read a book or two, and generally enjoyed myself. It’s a pity I still have to pay for my course, but hey, that’s life. I will return to the study books, but not for a while.

So now I want to learn how to be an artist, any helpers want to lend a helping hand 😉