I’ve been a member of Amazon Prime for a few years now, and it has to be said, the service is getting really poor. Or should I say it’s poor when they use a particular courier service. On Monday this week I placed an order on Amazon using their Prime service, it wasn’t a particularly exciting order but that’s beside the point 😉 Anyway, I received the usual emails from Amazon confirming the order and giving me details of how to track it on the couriers website. The following morning I visited City Links website (the courier in question) and noted that the package was scheduled for delivery that day, I waited, it did not appear :-/ So I contacted City Link, they assured me they were looking into the issue and confirmed the package would be delivered on the Wednesday, so I waited again, and no package arrived. Thursday arrived and checking on the packages status on City Links website showed it again being loaded onto the van and sent out for delivery, it was no surprise that the package did not arrive. Fair enough, it was maybe a bit much to ask, I mean, imagine a courier company actually delivering a package.

Giving up on the whole thing I decided to click the button on the City Link website ‘return to sender’, then I contacted Amazon again and told them it was being returned, they then arranged for a refund. It was therefore a bit of a shock to get a knock on the door this morning from the City Link driver with the package, obviously telling them to return it to sender must translate to deliver it five days late please. 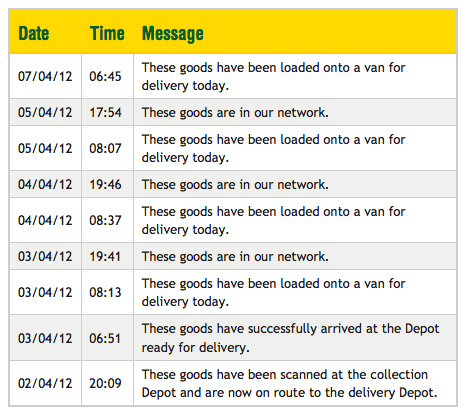 I refused the package, since I’d already told them to return it to sender anyway and Amazon had started the refund process. But I am wondering, why should I pay for a Prime service that is so poor? It’s not the first time that City Link have failed to arrive when they’re supposed to, in fact whenever it’s now at the stage that whenever we see that City Link will be bringing a package we’re starting to guess which day they’ll actually appear.