It’s hard to imagine a druid as being bouncy, well, just consider some of the activities they’re known for, (here described by Pliny the Elder) “A [druid] priest arrayed in white vestments climbs the tree and, with a golden sickle, cuts down the mistletoe, which is caught in a white cloak. Then finally they kill the victims…” Mr Elder didn’t mention at any point during the ritual that the druids were particularly bouncy at all. Though perhaps a certain amount of bouciness would occur after lighting the blue touch paper of a wicker man, Cicero makes no reference to them bouncing, nor does Lucan, Suetonius or Caesar.

So why you may ask would I suddenly be wondering how bouncy a druid would be, and whether a certain amount of bounce would be part of their daily ritual. Well, in August we went to see Mitch Benn perform at the Edinburgh Fringe.

During the Reduced Circumstances show there was a song about bouncy druids, it was one of those songs that get inside your head and refuses to leave 😉

A week or so after the show and I was playing around with a bit of typography and getting nowhere fast, still the druids bounced through my brain and I decided it was time to pry them lose. So, I set about creating a bouncy druid bit of typography. Something however was missing, the design needed something, it needed a bouncy druid or two. Luckily, I had the perfect reference images, we’d spent the week in Fife following the show and visited a touristy place with a huge bouncy pillow ‘thing’ which our neice decided to try out…

So, that was my reference material sorted, the rest was easy 😉 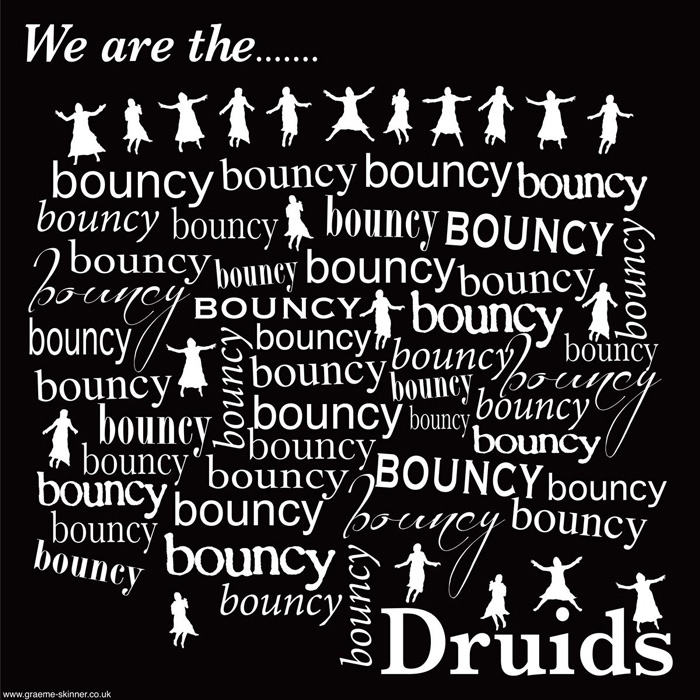 Once the design was finished I stuck it online, and tweeted a copy to Mitch Benn who suggested using it as a design for a t-shirt. Well, I couldn’t resist could I 😉 link