For one reason or another I’ve not had chance to get the watercolours out for what feels like years, so I decided to make the effort and get my eye in again with a small practice piece. Now I have hundreds and hundreds and hundreds of reference photographs which I take and file for just such occasions. Living where we do surrounded by such excellent scenery it would be difficult not to have a reasonable selection of reference images really. This is of course why I ended up painting something from a photograph taken by someone else 🙂 I was sitting flipping through images on the screen looking for one to work from and I had Facebook open at the same time (as you do) and a photograph popped up and I thought to myself ‘hey, I’ll paint that…’ then I became distracted and did nothing about it for a week or so – it was too cold in the house for watercolours to dry in anything less than a day anyway. Eventually I printed out a reference image, put a few pencil marks on paper and started to paint, I was a little nervous, when I last painted it felt like there was a glimmer of understanding poking its way into my brain but would I get that glimmer again or would it be like starting from scratch again? Well, the first wash was a disaster, as I raced to correct it I started to relax, this was how I remembered watercolours to be, a race against time to stop it all going wrong 😉

So, this is based on a photograph by John Howe, I was going to add a wizard near the tree but in the end I just painted it without embellishment. 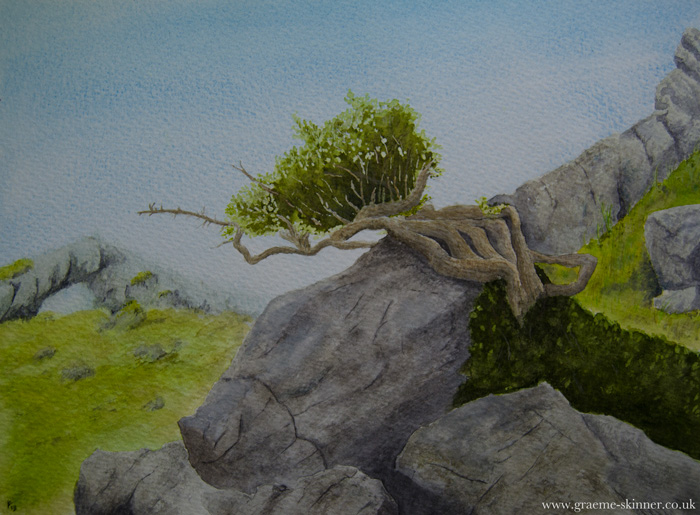