My first WC sketch from a real life event 🙂 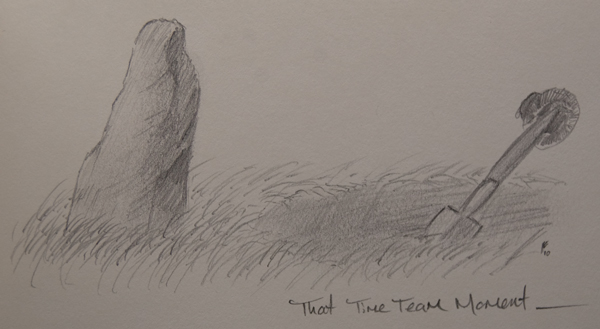 This week we made a start in the garden, our first task was to remove a rose bush which was near death, we’d done our best to save it but there was nothing we could do. As we had a plant ready and waiting to go in it’s place and it was above freezing outside it was time to pull on the boots and get the hat in place for some digging. The old rose bush came out really easy being half rotten near the roots, at that point we decided digging out a bed for the new plant and adding a few more items would be a good idea.

So, I adjusted the hat, got the shovel ready and started digging, after only a short while the shovel hit something solid and large; was it a water pipe I was about to break, a hidden treasure chest, the remnants of a Roman fort…. there was only one way to find out. In short order I’d dug down and cleared away the dirt. It was at that point that Julie asked if I thought I was on Time Team, and to be honest she had a point, I was half kneeling in a mucky hole slowly uncovering a rock, of course I was wearing my Phil Harding Hat (okay, it’s not really, I wear a Tilley Air Flow Hat as my brain often overheats). It was a rock I uncovered, or should I say small standing stone as once it was extracted from the hole we discovered it had a flat bottom and stood out of the grass like a long lost relative of from Castlerigg Stone Circle. There was a couple of things I found unusual about it, it was not one of the normal rock types for our garden, nearly all of the rocks I pull from the ground when I’m digging are sandstone, this looked very similar to the igneous rock found in the Langdales.

As I clear the ground where the standing stone has been pulled from smaller stones appear, most are of the same stone type and many look shaped slightly, at least to my eyes. Now this is the point where my imagination takes over, perhaps it’s watching too much Time Team or perhaps it’s reading too many books on pre-historic Britain, but we now have our own small standing stone in the garden. I’m still on the look out for the first stone in the garden to show signs of rock art – well, it’s not too much to ask surely 😉

Discovering this lump of history has not only given us a small garden feature, it’s inspired a short story, but more of that another time.

For more information on the Weekly Challenge look here.