Okay, a little background first, some time ago on the evil that is Facebook (which I obviously visit most days ;-)) John Howe posted a photograph

with the comment “Speaking of dragons… it wouldn’t take a lot to transform those rocks on the left into something with scales, heading back into the sea.” A few comments later and it became “What if we all use this image as reference and see what we come up with?” After reading these and other comments I decided I’d give it a go with the intention of just transforming the rocks using photoshop into something resembling a dragon – not to hard really, a tint of colour here, a bit of shade there and the you go a nice fluffy dragon looking out over the water. This simple plan went wrong as I realized that I really don’t like drawing dragons in photoshop, well, I’m happier drawing on paper with a pencil than using the wacom but for this quick edit it would have been handy to just once work completely in photoshop 😉

So, the obvious solution was to print out the image and sketch over it, which I tried but did not enjoy much. A few sheets of paper and a lot of scribbles later and I’d decided that the rounded mound of trees in the distance was really crying out for a castle upon it, so that was added to the sketch and I marked up a nice clean sheet of watercolour paper. The sky was added quickly and I started on the towers for the castle, as I painted away I thought the island/mound on the left would probably feel left out if there was no castle upon it so I added a few more towers. That only left the tiny island in the middle, which was starting to look lonely… you get the idea. The castle on the very left of the page replacing the trees was a very late decision, but not as late an addition as the little guy in the doorway.

Anyway, the painting was done and I was about to upload it when I decided I did not like the colour of the dragon much, and so I changed the colour in photoshop 🙂 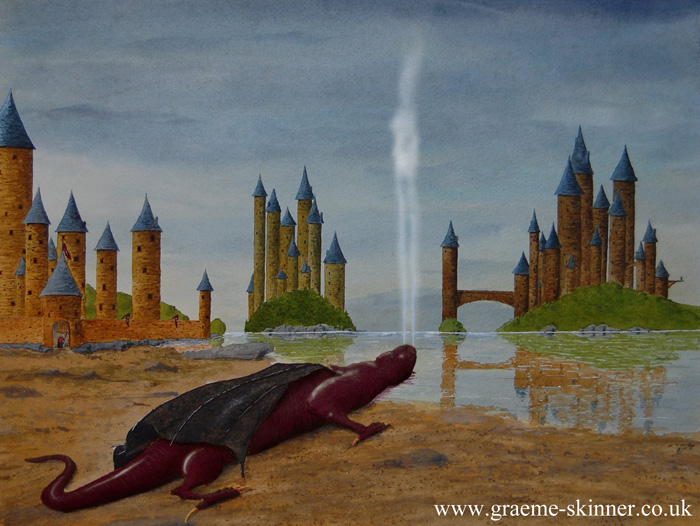