It’s 1986 and the single of the year is Don’t Leave Me This Way (for some unknown reason, there were in my opinion better songs that year). Anyway, both Chernobyl and the space shuttle Challenger had gone bang in the worst ways possible, Halley’s Comet makes its second visit of the 20th Century, and the first computer virus hits the screens/hard drives/floppy disks. Amongst such momentous events I leave school, as much to the relief of the teachers as mine (it’s the only reason I can imagine the teachers buying so many balloons and party poppers anyway). My plans on leaving school had been fairly simple, to become a photographer, there had been a couple of apprenticeship options going at the time, but I’d found the idea of working as a draughtsman for the local Steel works, or down at the nuclear plant less than appealing. So, I take the only real option available at the time which was a combination of art college and on the job training with a local newspaper. The memories of sitting in that corridor at college wondering who everyone was around me are still quite vivid, I even remember wearing my best slacks and shirt for the occasion (day two saw me in scruffy jeans and a t-shirt but I did make the effort on day one).  Much of the actual course work on those first few days is a blank, which is odd as I don’t remember us going to the pub much during the first week, I remember spending an inordinate amount of time drawing a Hobbit hole complete with what I can only describe as a psychedelic Gandalf at the front door.

You may, or may not, be wondering where this is all going. Well, yesterday I collected a photograph I took back in 1986 from my folks. They’d been sorting through my Grandma’s things and thought I may want it back. As I said, I’d begun training to be a photographer, eager to hone my skills I visited my grandparents house and asked if I could take their photograph. Nowadays if you ask someone that you’d either get a look of horror, or they’d stand still for a moment so you could take a snap. My grandparents however took the matter of having a photograph taken very differently though, they got changed, brushed hair, then sat very still together on the sofa. I suggested that they get a bit closer together, and briefly they lent together and I grabbed a quick photograph. A day or so later I’d developed the film and printed out the photograph, they were delighted with the results in only a way perhaps that grandparents can be 😉 and being pleased with my work I enlisted the help of another member of the college art course (who was running a  picture framing business) and had the photograph framed. It hung pretty much in the same spot in my grandparents house for years after. Now I just need to find a suitable spot for it. 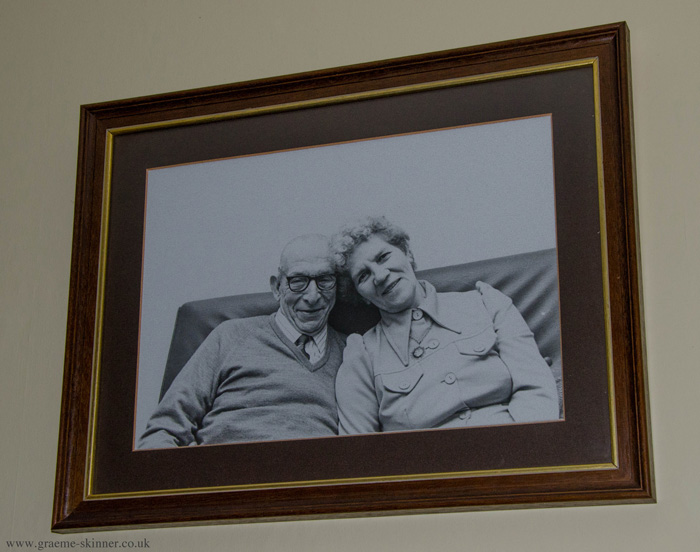