Week eight of the weekly challenge 🙂

This is all the fault of one of my Facebook friends, so don’t blame me for this one 😉 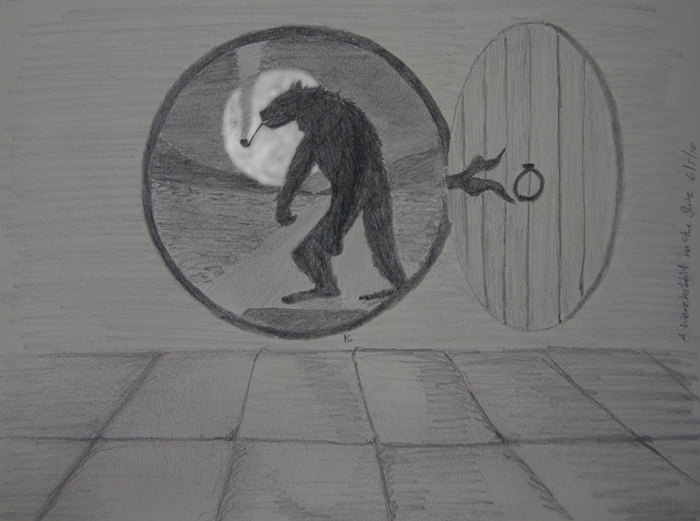 I wondered why there was a Werewolfhobbit, and why it smoked a pipe, and so I scribbled some text to go with the picture….

Mal Twofoot hesitated, for a moment he imagined hearing his parents bedroom door creaking. After standing in silence for nearly five minutes Mal decided it was safe to carry on. He was starting to sweat and his heart was threatening to burst out of his weskit. From the small shelf to the right of the sink Mal grabbed his fathers least favourite pipe and a small pouch of Old Toby, in his haste he knocked over the milk jug, thankfully it was empty though it wobbled and spun alarmingly towards the edge of the worktop, Mal caught it as it was about to topple off the edge – nothing would have brought his parents rushing through quicker than a breaking pot.

Trying to calm his nerves Mal took a deep breath and went to sit by the kitchen fire which his father had banked up high ready for the morning. Laying the pipe out carefully on his knee he started to fill it trying to remember just how his father used to do it. Watching someone do something and doing it for yourself however are two different things and soon Mal had shredded tobacco covering a wide area of the floor around him. The first pipe is an important event in a Hobbit’s life, normally though it’s not using a ‘borrowed’ pipe and stolen tobacco.

Mal took a taper from a pot in the hearth and lit it on the glowing coals. He was just about to light the pipe when he had a sudden thought, the smoke would soon run through the house and if his parents woke would soon realise he was up to something. Throwing the taper onto the fire Mal decided his only option was to go to his fathers favourite smoking place which was under the Oak tree down by the hedge.

Reaching the front door Mal remembered tonight was the night of the full Moon and his parents had blocked all the windows and locked the front door for the night. Mal had no idea why they had to lock themselves inside when the Moon was full, none of his friends had to. He hesitated, half tempted to replace the pipe in the kitchen and go back to bed, but something triggered that adventurous urge that so often landed him in trouble, he knew he was going outside that night.

Not knowing where his father kept the front door key Mal slipped quietly down the hall and into the sitting room, the window was covered not only with thick curtains but wooden shutters were closed tightly inside the window frame. The shutters creaked a little but he hoped not enough to waken his parents, with the window propped firmly open Mal slipped outside into the garden. It was pitch black in the garden, he could see the Moon glaring brightly just beneath the horizon giving him no light to find the Oak tree. With one hand held before him he groped blindly toward the bottom of the garden and a small wooden bench beneath the Oak tree.

For a what felt like an hour or more Mal sat fumbling with the tinder box, he’d only ever used it before to light a candle in his room. Outside in total darkness with a breeze rustling the leave above finding his way around the tinder box was a tricky affair. Eventually he had a small glowing piece held above the pipe and he drew deeply though the mouthpiece expecting to feel the satisfaction which is so evident on his fathers face whenever he lights a pipe. Instead the smoke hit the back of his throat and Mal thought he was about to be sick, the sick feeling gave way however he started coughing, he coughed so hard that tears were running down his cheek and he could hardly breathe. Eventually he stopped coughing and wiped the tears from his eyes.

Picking up the still glowing pipe Mal sniffed the wisp of smoke coming from the bowl suspiciously, perhaps he’d done something wrong, or the tobacco had gone bad. Somehow he knew that he had done everything his father had done, and his father had smoked the same tobacco earlier than evening. Now he had fully recovered from his coughing fit he took out the tinder box again and lit the pipe this time half-heartedly drawing on the pipe. Moments later Mal had a steady stream of smoke billowing over his head, he still felt a little queasy but the thought of bragging about smoking to his school friends in the morning kept him going though he was yet to see the real appeal it had for his father. Mal sat trying to imagine the look of envy on his friends faces when two things happened almost at once; his father opened the front door frantically calling his name, and the Moon started to peep above the distant hills.

Not wishing to have his first smoke interrupted by his fathers wrath he slipped from under the tree towards the hedge hoping to slip out into the lane as he did so the Moon half blinded him. He tried to blink away his tears but nothing helped leaving his vision blurred and confused. The cries from his father became muffled and Mal thought he must have gone back inside and closed the door.

Adelard ran into the garden calling Mal’s name, he could see the Moon was starting to peep above the hills and he wanted Mal inside before it was much higher in the sky. Adelard tried to pierce the darkness as he looked around the garden but it was too dark to make anything out, then he noticed the smell. Wafting towards him from the bottom of the garden was a hint of pipe smoke, Adelard sniffed again and he was certain he could smell some of Old Toby’s finest being burnt. Moving down the garden Adelard couldn’t help but remember the Old Wizards curse the day Mal had been born. It had started out a fairly normal day in the workshop apart from spending nearly every minute expecting the door to open and his father-in-law to call him home. Marigold was a week past her due date and when they’d talked to the mid-wife she’d sounded confident that Marigold would go into labour within the next few hours, that had been ten hours ago. Now when the door creaked in the wind his heart would stop and he’d look hopefully towards it.

The morning crawled by slowly and after a hasty lunch at his bench Adelard picked up another piece of wood and started to glue it ready for joining. He was starting to get lost in his work when the door crashed open, his father-in-law stood there with a wide grin.

“It’s time!” He called over to Adelard.
Adelard threw down the wood and moved around the workshop “I’ll be over in a minute”, he said as he pushed the fire guard into place then made sure all the work was safely stored. As he finished tightening the top of the glue pot the door creaked open again, looking up Adelard was shocked to see an old wizard standing there.

“Sorry,” Adelard said “I’m closing up shop for the day, you could always try over the hill.”

“My wagon won’t make it over the hill,” the wizard replied in a quiet voice. “You’ll have to repair it now.”

“I’m sorry sir,” Adelard said trying to remember his manners. “I’m to be a father today sir and I’d not like to miss the event.”

“I have no interest in your family matters,” the wizard replied stepping up to Adelard. “I have to be far from here by night fall and you need to fix my wagon.”

Adelard was normally a quiet Hobbit, but his temper suddenly got the better of him and he took the old wizard by the arm and led him outside. “If you are still in the area in the morning I shall be happy to look at your wagon sir, now however I am going home.”

Before he could walk away the wizard lifted his short wooden staff and blocked Adelard’s path.

“This day you shall become a father Adelard Twofoot,” the wizards eyes almost glowed as he spoke. “Your Son however shall be cursed to live his life as a Werewolfhobbit. The first time he looks upon a full Moon he shall change into the wolf, and a wolf he shall remain whilst the Moon is full.”

Adelard was about to reply when a scream in the distance cut through him, “Marigold?” He said to himself, looking round he could see his father-in-law standing outside their Hobbit hole. Adelard turned to run up to Marigold then looked back to speak to the wizard, but the wizard was no where to be seen. His disorientation was interrupted by another scream and he was off at a run back home.

He never spoke of the old wizard for several months, but as each full Moon approached he would go around covering all the windows and locking the door. Then one day as he pulled the curtain across the hallway window Marigold asked him why he was so afraid of the full Moon. Adelard told her of the encounter, her response was not quite what he had expected, she simply nodded and moved around the place blocking up windows.

For fourteen years they had managed to keep Mal away from the full Moon, now standing in the garden Adelard feared the worse. As the Moon rose further into the sky he could see more detail in the garden, and there, beneath the Oak tree he made out a shape, it was something he had feared since hearing the wizards curse his Son had become a Werewolfhobbit. Mal looked up at his father and growled, then with a bound he leapt over the hedge and down the lane.

As Adelard returned to the house he could see Marigold waiting for him on the doorstep, with tears rolling down his face he explained what had happened, Marigold gripped his shoulder and led him inside to wait for Mal to return. It was two days later when Mal came home just before dawn, his clothes were now rags just hanging from his shoulder and waist. For a while he said nothing to his parents, then confessed that he’d gone outside to smoke his first pipe.

Marigold looked at Adelard and shook her head, “I told you smoking was bad for you.”

Sorry that this is quite rough and ready, I didn’t have time to rewrite it my usual dozen times.