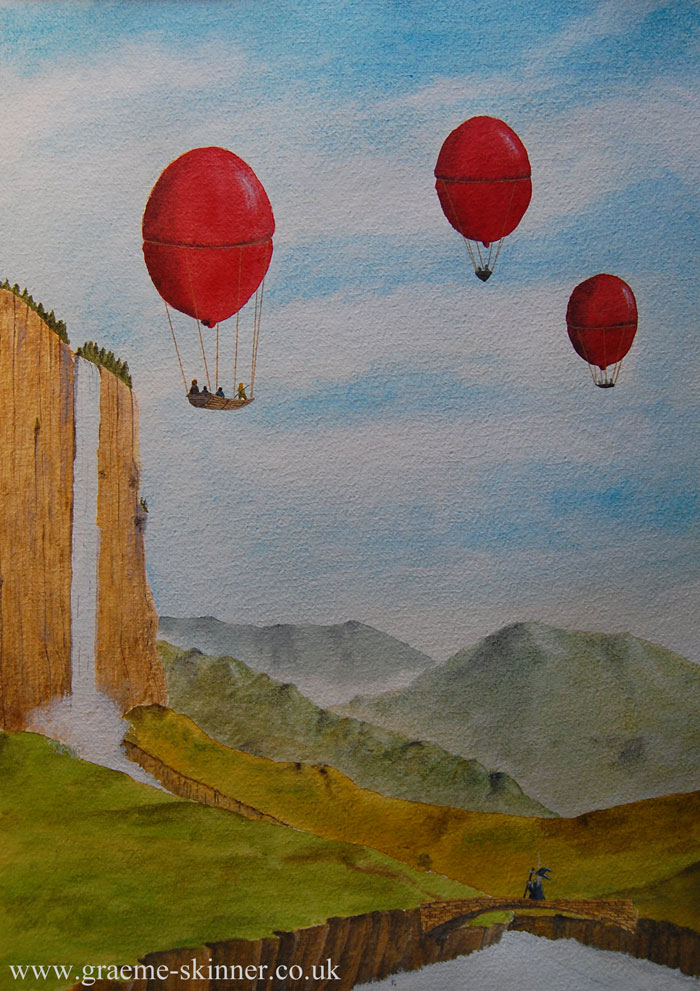 I was trying to think of a painting for the theme of the month which is Airships over on the John Howe website. And I was thinking (if you can call it that), what if Tolkien before he wrote the Council of Elrond scene had watched a few hot air balloons fly by, perhaps he’d have sent the ring South by balloon instead of with the fellowship on foot.

Elrond looked annoyed and the other members of the council shuffled in their seats.

“No one is saying you have to cover the distance in one day.” Interrupted Elrond, “Think of it more of an extended wander.”

“I already have bunions on both feet, and an ingrown toenail.” Complained Frodo, “please don’t forget the condition of my feet.”

“And my legs,” chirped Legolas.

“Okay, I get it.” Elrond said slamming the table in frustration. “So you’re all too lazy to walk to Mordor.”

“How many horses do we have?” Asked Gandalf.

“Not enough I’ll warrant,” Aragorn replied. “Rivendell lost far too many for the great feast.”

No one answered, though Elrond threw a half eaten roll at Bilbo.

“At this point I’ll listen to Bill the Pony,” said Elrond.

“My Lord, I am Étienne from the realm of Golfier,” he said bowing towards the other members of the council. “We have for many years now been designing vessels that fly in the air and are moved by nothing more than the winds.”

Elrond, and most of the other council members looked doubtful.

“This is true my Lords,” said another Elf standing next to Étienne. “I am Findaráto brother of Étienne, these vessels of the air are a wonder to behold.”

“Hang on,” Gandalf said standing up. “I’ve seen those airships, they’re nothing more than little baskets suspended beneath bags of air.”

“How far can one of these airships go?” Elrond asked curiously.

“We’ve never flown more than 40 miles in one go,” replied Findaráto. “That’s not to say they won’t fly further, just that we’ve never seen the need to travel further than that.”

“There’s no way you’ll get me up in one of those things.” Gandalf said shaking his head.

“Hmmmm, let’s not be hasty,” said Elrond holding up a hand to silence Gandalf.

“Are you halfentish?” Legolas asked Elrond with a smirk.

The council chamber erupted with laughter and Bilbo called for ale which he’d done every fifteen minutes since they started.

“If you’re all quite finished,” Elrond said, he was looking mightily cheesed off and everyone fell silent. “That’s better. I like this idea of flying silently into Mordor, it’s the one thing that Sauron won’t consider.”

“Is that because it’s a stupid idea?” Asked Gandalf.

“Well, we can’t walk, ride or Eagle it there,” Elrond replied sharply. “We have little choice left to us. How long will it take to build these airships for the trip to Mordor?”

“You can count me out of this scheme.” Gandalf said to no one in particular.

For three weeks the Golfier brothers worked on their airships until three were ready to fly, the fellowship sans Gandalf assembled and climbed aboard their ships. Gandalf shook his head and wandered down into the valley of Rivendell, he couldn’t watch them crash into the ground and die. As he stepped onto the bridge Gandalf looked up and saw the three airships floating off into the distance, slamming his staff down onto the bridge he called out to the fellowship “Fly you fools!”

Of course the text and Gandalf of the bridge is the result of Julie saying to my suggestion of the fellowship in airships was “yes, and Gandalf could be shouting ‘fly you fools’ at them” 🙂 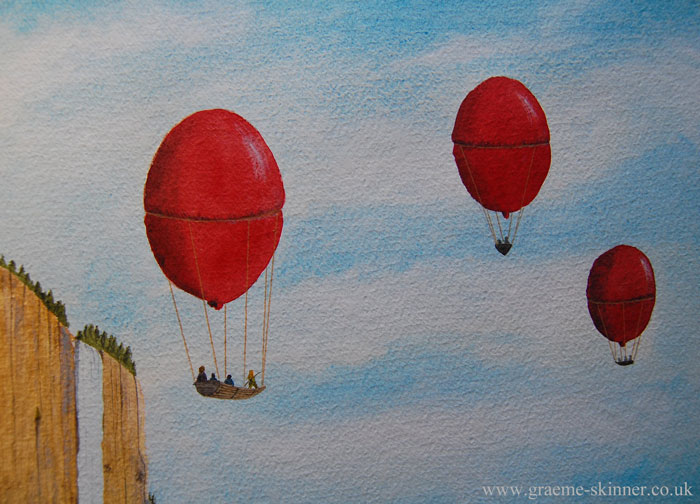