Some time ago Eden District Council sent out various bits of literature announcing their ‘Bag and Box Scheme’, part of this literature was a calendar detailing when they’d be collecting the items we’d left out for recycling. The first collection date for our property was listed as the 10th July 2012, unfortunately they didn’t manage to get the bags and box dropped off in time for this collection date so we carried on with our usual recycling and sent a message asking when the bags and box would be delivered. A quick reply came from Eden District Council to the effect that they’d be delivered in plenty of time for the next collection date, so, the next due date 24th July 2012 came and went with no bags or box in sight. I decided to email the council again and received a reply that they were delayed due to ‘high demand’, which did amuse me as you’d imagine the council would be aware of the number of properties they covered and what the demand would be before they brought a scheme in, anyway the email promised to have the bags and box out before the end of that week. On the same day another department emailed to say they would deliver them before the next collection date, so we waited….

On the 6th August 2012, the day before our next collection would have been due we’d seen no sign of any bags or box, so I emailed again (I should be getting money back from the Council Tax given the amount you have to chase the council for things these days), anyway, they informed me that they would get someone from the office to deliver them as their contractor had failed to do so. A short while later a car pulled up and the bags and box were dropped off. So finally we could use the recycling scheme the council had set up, we filled up the recycling bags (the box could wait until next time as we’d just taken the empty tins and bottles to the recycling), and we drove the bags down to the lane end. 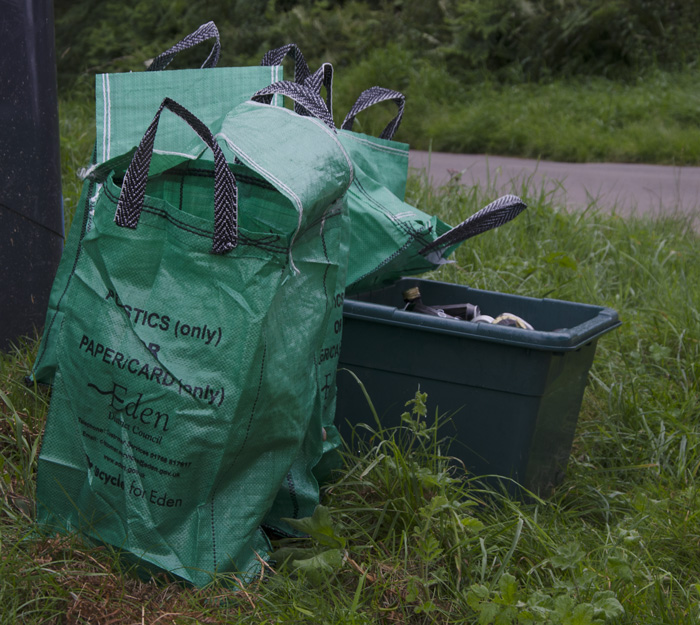 And of course nothing happened, they’re still there, as are other bags and boxes in the area, guess they don’t really want people in rural areas to recycle. We’ve left the bags there, in the hope that one day the council will remember we exist, I’m sure if we stopped paying council tax to them they would quickly remember where we lived 😉

One Thought to “Still Waiting”