I’ll be honest, just over six years ago when Peter Jackson and Fran Walsh posted the letter online that their services would not be required by New Line I never really imagined that a film would be made in the end. It appeared at the time we’d see nothing but legal arguments and inter-studio-squabbling. It’s 2219 days since that letter appeared online, and during that time there have been strikes, director changes, and of course the two films becames three, in three dimension, with extra frames per second….

Yes, we’re just back from watching The Hobbit – An Unexpected Journey, and here’s a brief review (it containes spoilers so don’t read on if you’ve not seen it yet ;-)) 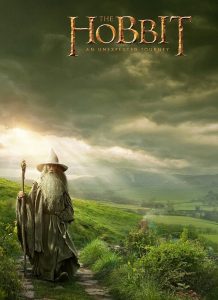 The cinema in Penrith, Cumbria is fairly small, we’d booked our seats online as we didn’t know how busy it would be, and I’m glad we did as although the cinema wasn’t full (it was a Sunday lunchtime showing after all) we did ensure we got good seats.

This was the first film I’ve watched in 3D so I wasn’t sure what to expect, whether it was going to be little more than a gimmick which distracted from the film itself, it didn’t, instead it helped imperse me into Middle Earth in a way which I normally only experience in my head. I found the shots inside Bag End to be very well done, the views we had of it in the Lord of the Rings was excellent, but the 3D really drew you inside.

I was curious as to how they would start the film, and how they would introduce a younger Bilbo (Martin Freeman), the change from Ian Holme to Martin Freeman was seamless. When they first announced Martin Freeman as Bilbo I thought it was a good choice, and seeing him on screen you just know there wasn’t anyone else who could have played that part so well. In fact I didn’t have problems with any of the cast selected for the various parts in the film – though I did see a bit of Rossetti in Aidan Turner every now and then 😉

The story was very close to Tolkien, yes there are bits added in, but then they very rarely make any book into film without changes, I didn’t see the additions and changes as a problem though. I’d heard a couple of critics complained about ‘slow sections’ in the film, and I came out of the cinema wondering if they’d watched the same film, or perhaps they have had their senses dulled years of constant action films with no plots.

Visually the film was a treat, and not only for Tolkien fans. I’m glad they got John Howe & Alan Lee back on board as concept artists, I can’t imagine anyone else taking those jobs on with such a level of dedication. When the film comes out on DVD I’ll be sure to play who sketched what 😉 It’s inspring to watch a film like this then consider how much work goess into creating it.

Highlights of the film for me would create a long long list, but returning to Bag End and the Shire on the big screen was a treat, as was seeing Rivendell again, and the views of Dol Guldur gave me goose bumps for some reason. As a fan of Tolkien I must say watching Bilbo and Gollum in a duel of riddles was excellent fun.

Did I have any negative views on the film, well, just one really, the mark Gandalf made on Bilbo’s front door was wrong, but I can probably live with that major issue 😉