The first new growth for 2009 is coming through, it’s a good time of year…

It probably does not mean that too much to the majority of people these days, but looking out of the window I can see the buds developing nicely on the Kilmarnock Willow and the Snowdrops starting to spread beneath the trees.

If we were to go on the astronomical definition, spring starts on the Vernal equinox and ends with the summer solstice (in the Northern hemisphere this equates to 20th March to 22nd June). An astronomical view of season is not a bad one to take when you consider the reason we even have seasons. Thanks to the Earth’s axial tilt (around 23.44° from the orbital plane) half a year we have the Northern hemisphere tilting towards the Sun and for the other half the Southern hemisphere tilts towards the Sun; the transition from one tilt to the other does not happen over night of course and so we get the gradual change from winter to summer via spring and summer to winter via autumn. This is all well and good, knowing that science has defined it so well we can sit back and wait until the 20th March for Spring to drag us out of the winter doldrums. Well maybe not quite 😉

Just because we’ve hit a certain point on the astronomical calendar does not mean that Spring will erupt around us, nor does it mean that plants will sit around waiting for an exact date – for some reason they never look at a calendar before starting to bud or put forth new growth. So how would our ancestors have known Spring was upon us? The Celtic tradition Imbolc is one of the main festive times on the Irish calendar and was celebrated amongst Gaelic & Celtic cultures. Imbolc was either held in early February or the first local sign of spring.

Imbolc is thought to be a forerunner to the American Groundhog Day, as it was often seen as the day when Serpents or Badgers would leave their winter den for the first time. Their is a (Scottish) Gaelic proverb:

Translates as:
“The serpent will come from the hole
On the brown Day of Bride,
Though there should be three feet of snow
On the flat surface of the ground.”

Which uses the term Day or Bride to bring Brigid (the Gaelic goddess of poetry, healing and smithcraft) into the festival and time of year. Brigid is associated with sacred flames, and healing – the lighting of candles and fires at the festival is a celebration of returning warmth and Sun to warm the Earth. In Gaelic folklore we see Imbolc as the day the Cailleach (a divine hag of all things) would gather her firewood for the last days of winter, not wishing to gather firewood in wet and windy weather Cailleach would ensure that Imbolc was a nice sunny day if she intended to gather lots of wood (if she gathered lots of wood she was going to extend winter and delay spring). Therefore many would hope for foul weather on Imbolc to show that Spring was close at hand.

Many people however will use a phenological definition of Spring, when they see certain plants spring to life or animals in the field they’ll know that Spring is upon us. For myself, when I see Snowdrops in the garden I know that we’re not far off the end of winter and better weather is almost upon us. 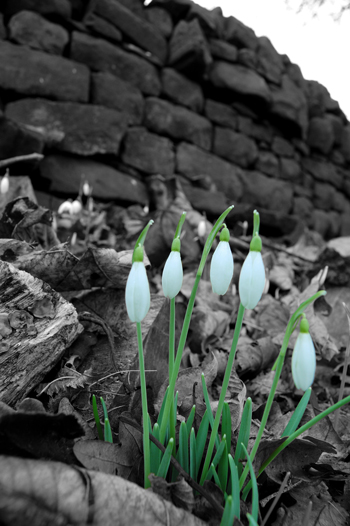 The etymology of Spring is apt too…
Spring “season following winter,” 1547, earlier springing time, (1387), spring-time (1495), spring of the year (1530), which had replaced O.E. Lent by late 14c. From spring (v.); the notion is of the “spring of the year,” when plants “spring up” (cf. spring of the leaf, 1538). Other Gmc. languages tend to take words for “fore” or “early” as their roots for the season name, cf. Dan. voraar, Du. voorjaar, lit. “fore-year;” Ger. Frühling, from M.H.G. vrueje “early.” In 15c., the season also was prime-temps, after O.Fr. prin tans, tamps prim (Fr. printemps, which replaced primevère 16c. as the common word for spring), from L. tempus primum, lit. “first time, first season.” Spring fever was O.E. lenctenadle; first record of spring cleaning is in 1857 (in ancient Persia, the first month, corresponding to March-April, was Adukanaiša, which apparently means “Irrigation-Canal-Cleaning Month;” Kent, p.167). Spring chicken “small roasting chicken” (usually 11 to 14 weeks) is recorded from 1780; transf. sense of “young person” first recorded 1906. Spring training first attested 1897. (from Etymology Online)

Well, we’ve Snowdrops in the garden and the Willow is budding nicely, for me I know Spring is just around the corner 🙂