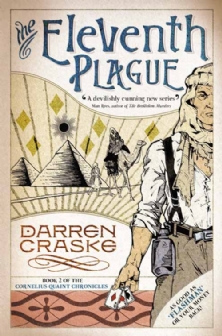 Reviewing The Eleventh Plague presented me with a problem, I received the book fully intending to make copious notes and give a thorough and page by page, chapter by chapter review. So what happened to all my plans, why am I sitting here working out a fancy way of saying, stop what you are doing and go by this book. Or more accurately stop what you are doing and go buy the first two books in the Cornelius Quaint Chronicles (as the Eleventh Plague is the second of the chronicles with The Equivoque Principle being the first).

Well, I’ll tell you what happened, Cornelius happened. Cornelius has been described as a mix of Sherlock Holmes and Harry Houdini with a hint of Indiana Jones thrown in for good measure, and when you read the chronicles you can appreciate that description. He’s not your traditional action hero, but he does have an element of Holmes given the era the books are set in and his cerebral approach to problems. Not that he thinks on the situation at hand as much as Holmes, nor does he have the drug issues 😉 Cornelius is every bit the showman Houdini was, and you’ll just have to read the Eleventh Plague to pick up on the Indiana Jones element.

What does make these books a pleasant change from the norm is Cornelius’ companion, he doesn’t have the mindless dogsbody that can’t think for himself, or the vacant headed bimbo that many seem to acquire. The companion for Cornelius in the Eleventh Plague is a rather mature fortune teller called Madame Destine, it’s almost as if rather than take Dr Watson along Sherlock took his house keeper Mrs Hudson to meet the hound of the Baskervilles. While Madame Destine may sound like a strange companion for Cornelius she actually works very well in the role to the point where her character is as strong as Cornelius throughout the book and often has a story line to match – no weaker underlying story for Destine, she gets level pegging 😉

Darren Craske writes with just enough description to immerse you in the World of Cornelius and Madame Destine without bogging you down with irrelevant details. The places he writes about in The Eleventh Plague are familiar in many ways I would imagine to most readers and so he does not need to spend pages describing every element of the landscape, but he certainly gives you enough detail to draw you into the book and keep you there.

There is one minor niggle with the book(s), each chapter has a playing card printed beneath the first few lines of text which makes it difficult to read at times. I don’t really like being dragged out of the moment to try and work out what something says. Maybe it’s just me (and perhaps it’s my ex-graphic design eye shouting in protest ;-)) but I do like books to have a clear text to read.

Luckily there is another book in the pipeline to look forward to, and believe me you’ll be looking forward to the third instalment when you’ve read the Eleventh Plague. I would imagine that Darren has had a movie company or two knocking on his door by now as these chronicles are shouting out to be filmed.